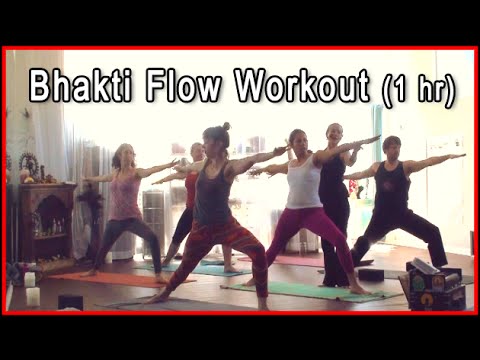 Designed for practitioners of all levels, in this Bhakti yoga workout, Kumi delivers an uplifting Bhakti yoga practice that includes mantras, asanas (poses) and satsang.

About Kumi Yogini
Kumi is short for Ma Nithya Kumudini which means “Eternal White Night Lotus”. The name was given to her while spending time at an ashram in India (2009). Kumudini began practicing yoga in 2001 at a gym in Denver, Colorado. “While on the mat, I immediately felt at home and sensed a deep connection to a part of myself that was numb for a really long time. My practice became the primary catalyst for physical, mental and emotional well being.” Seeing the significant change in her own life, she was compelled to begin teaching just two years later. She specializes in vinyasa flow, a practice emphasizing “one breath, one movement.” Her dynamic flow sequences are synchronized with high vibrational music and she provides a theme to compliment the essence of the ancient yogic teachings. Kumudini is an RYT/E-RYT certified instructor and has taught thousands of students and has led over a dozen 200 hour teacher training programs. She has been the featured guest for different yoga retreats and other yoga conferences across the country. She has served as Ambassador for Lululemon Athletica and Tonic apparel lines. She currently teaches yoga in Southern California (Los Angeles, Long Beach & Orange County) and continues to lead workshops, lifestyle programs and teacher training.

Kumudini and Trevor Tice, the founder & CEO of CorePower Yoga, were recently selected to shoot a yoga video for Gaiam, the world’s largest fitness DVD distributers in the world. These were released at Target & Barnes & Nobles stores in March, 2013. She also has a CorePower Yoga DVD and was featured as a teacher on a regular yoga program for Comcast (channel 5) for several years.

” I love all the different styles, approaches and techniques that yoga uses to help us wake up and realize our highest potential. That’s what yoga is about. Integrating body, mind and spirit in healthy and positive way to promote balance and harmony from within. ”

Crossfit Workout Music – What is Crossfit?